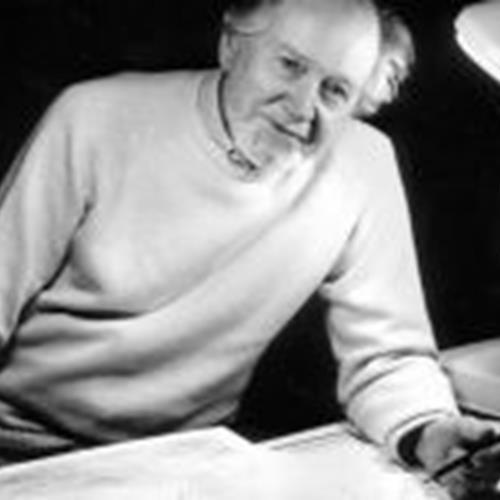 Ronald Searle, internationally acknowledged as being one of the great graphic satirists of our time, was born in 1920 in Cambridge, England. He studied at the Cambridge school of Art and his first humorous drawings were published in the local paper when he was fifteen.

In 1939 he joined the Royal Engineers and fought in Malaya. He was captured by the Japanese and spent the next three-and-a-half years as a prisoner on Singapore Island and in the Siam jungle, working on the notorious Thai-Burma Railway. He was finally released with the survivors of Changi Gaol in 1945, and by the time he was discharged by the army the following year, he had already embarked on his richly varied artistic career. He was swiftly recognised as a remarkable draughtsman and an original humorist. In 1949 his first collection of satirical drawings, Hurrah for St. Trinian’s, sold over 50’000 copies and he has since published over fifty albums of drawings and books in collaboration with others.

As well as travelling extensively for many years as a pictorial reporter for American magazines – during which period he covered such varied subjects as the Eichmann trial in Jerusalem for Life magazine, travelled with Nixon and Kennedy during the American Presidential campaign, spent time with the Eskimos of Alaska , watched the building of the Berlin Wall, and (for UNICEF) visited several countries to report on the plight of refugees – he also has found time to do film work in Hollywood, work as a designer of medals for the French Mint, and write a book about the Japanese invasion of South East Asia.

From the ’sixties major exhibitions of his work were being held in America, and most European countries, and his work is now represented in many public collections both sides of the Atlantic.

Ronald Searle has been a major influence on succeeding generations of graphic artists both in Europe and America. He died on December 30th 2011, aged 91.